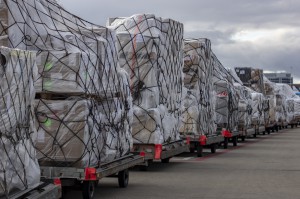 According to a report, the Dutch government intends to impose taxes on shipments flown in cargo aircraft. If okayed, this would be extremely detrimental to the competitiveness of both Schiphol and Maastricht Airports, warns the investigative report.
The air cargo industry hopes that the taxation will either be delayed or scrapped altogether.

The cargo tax is part of a larger piece of legislation on aviation taxation which is planned to be put into force by 1 January 2021 but may be postponed due to the Covid-19 crisis.
The tax will range from €3.85 per ton MTOW for the noisiest aircraft to €1,925 per ton MTOW for the quieter ones. Belly cargo is exempted, which is seen as most discriminating by the industry.
From the very beginning, the introduction of tax plan has been contested by the air cargo stakeholders, especially since Amsterdam’s full freighter business was already hampered by slot scarcity.

This is the reason why the Secretary of State for Finance Hans Vijlbrief earlier this year commissioned a study on the effects of the tax for the Dutch air cargo sector and the position of the Netherlands as a hotspot for logistics.
The research was carried out by specialized bureaus SEO and Districon and was based on interviews with 18 stakeholders. Apart from the two airports, a great number of airlines, freight forwarders, independent consultants, and the umbrella organisation Air Cargo Netherlands (ACN), gave input. The final draft of the report is to be discussed by the ‘Tweede Kamer’ of Parliament before ‘Prinsjesdag’ on 15 September, when the King in his state of the realm both looks back on the past political year and gives an outline of the government policy of the year to come.

The Dutch trade paper Nieuwsblad Transport has, however, been able to lay its hands on the report. Contacted by CargoForwarder Global, ACN’s managing director Maarten van As says that the organization does not wish to comment on the content of a leaked report. He has, however, no problem with admitting that ACN, together with Maastricht Aachen Airport set up a strong lobby to demand a report on the effects of the cargo tax on the Dutch airports.
“In this respect, we enjoy the support of the Council of State, which had already commented on the ‘leakage effect’ the taxation would create, forcing air cargo operations to airports across the border.”
According to Mr van As, ACN also protests the fact that the €200 million the tax is supposed to generate, will be absorbed totally by the treasury and will not be reinvested in environmental measures.
“It contradicts all the measures Schiphol Airport has taken over the last few years to attract more environmental-friendly aircraft,” he says. “Eventually all this cargo will have to be trucked to the Netherlands, adding to the environmental damage.”