Sunday May 1st  it was exactly one year ago that the Milkrun started. At the time one ground handler, one trucker and three forwarders participated in the pilot, a year later, the Milkrun counts over 16 participants. Now, after a year of operation, the first results can be drawn. The Milkrun provides many benefits: waiting times are reduced, significant reduction of truck movements at ground handlers terrain (over 40%), more efficient utilisation of trucks (load factor increased from 2.5 ton/truck before pilot to 5.2 ton/truck a year later) and fuel reduction hence a more environmentally friendly transport (over 30% CO2-reduction). The one-year anniversary offers a good opportunity to look back at the past year.

On May 1st, 2015, the Milkrun pilot started with the first participants; Bos Logistics, DHL, Menzies, Nippon and Panalpina. The pilot was initially focussed on loose cargo, but it soon turned out that  ULD-transport seemed suitable as well. The first results were positive: waiting times are significantly reduced, load factor is doubled and the number of truck movements between ground handler and forwarder are reduced. More participants joined the Milkrun in September 2015; Rgenus, DB Schenker, ITG, UTI, VCK Logistics, NBK, Fast Forward Freight and Quick Cargo Services. The second ground handler, Swispport, and the second trucker, R. Nagel, joined the Milkrun in February 2015. Since the accession of Ceva Logisitcs, the Milkrun counts 16 participants in total.

The accession of Schiphol Cargo as partner underlines the importance of the Milkrun. In addition, TNO is involved in the project as support of the performance reports. Soon they deliver a business case for the Milkrun. Air Cargo Book also provides an important contribution to the development of the Milkrun Portal, first in collaboration with Cargonaut, currently under direct command of all unified participants within ACN.

A total of 2481 Milkrun rides are performed over the last year. By cleverly combining freight, as many as 2915 trucks movements are saved. A side note of this number is that the Milkrun truck more often visits the forwarder compared to the situation in which a forwarder has arranged its individual transport. This saving of Milkrun trucks also means 2915 fewer trucks on the participating ground handlers terrain and 2915 fewer drivers at the front desk. The load factor has doubled compared to last year, from 2.5 tons per truck to 5.2 tons per truck. Finally, a CO2-reduction of average 30% is achieved in the first year.

Standing still is moving backwards; this is the slogan in which we continuously look forward for optimisation of the complete process and the use of the portal. On April 15th, the pilot for the Milkrun export started. Menzies and Nippon with Bos Logistics as trucker are the first to start with the pilot. Further conversation with participants will take place in order to add a second forwarder to the export Milkrun. The main problem for the export is currently the planning of the export trucks as import and export times are not parallel or don’t follow up. A new concept for this problem will be developed as well. 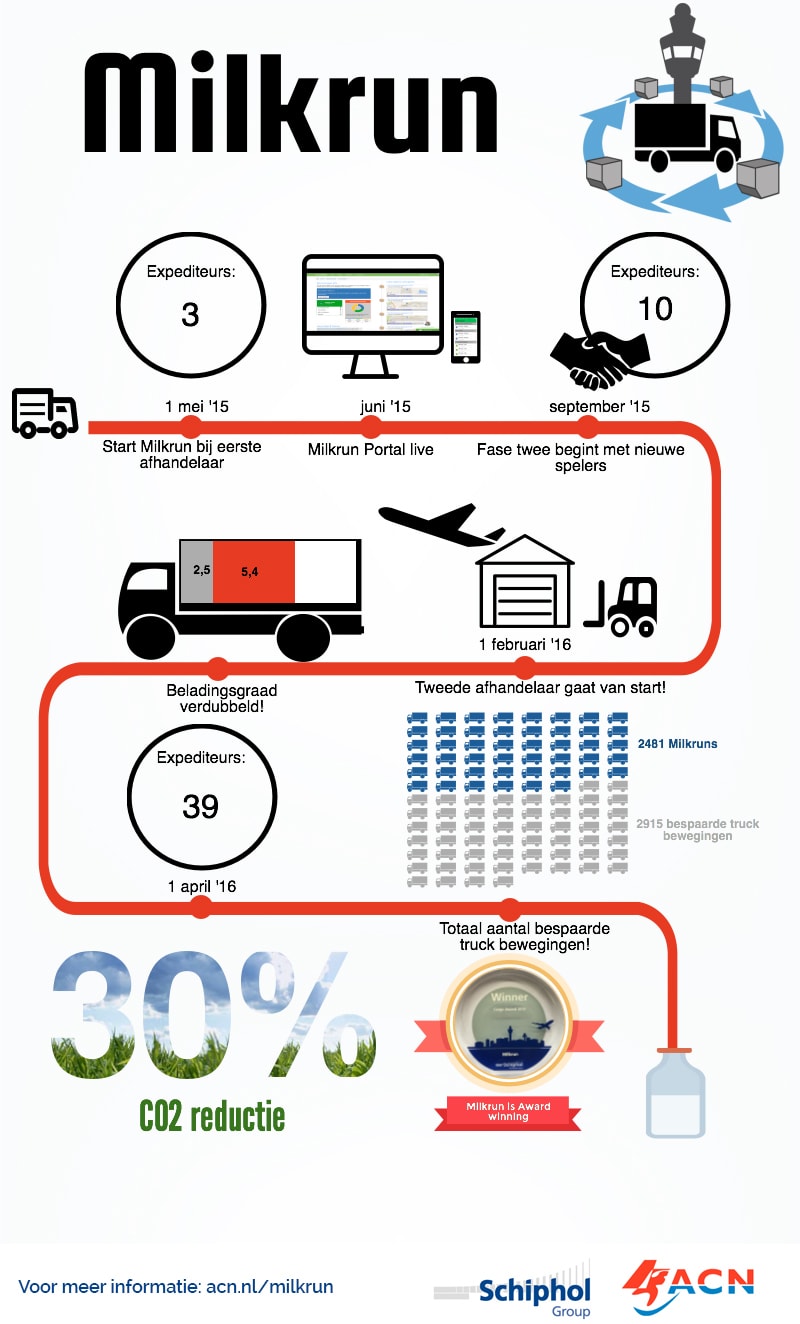