Geneva – The International Air Transport Association (IATA) released data for global air freight markets in August showing that improvement remains slow amid insufficient capacity. Demand moved slightly in a positive direction month-on-month; however, levels remain depressed compared to 2019. Improvement continues at a slower pace than some of the traditional leading indicators would suggest. This is due to the capacity constraint from the loss of available belly cargo space as passenger aircraft remain parked.

• Global demand, measured in cargo tonne-kilometers (CTKs*), was 12.6% below previous-year levels in August (-14% for international operations). That is a modest improvement from the 14.4% year-on-year drop recorded in July. Seasonally-adjusted demand grew by 1.1% month-on-month in August.

• Global capacity, measured in available cargo tonne-kilometers (ACTKs), shrank by 29.4% in August ( 31.6% for international operations) compared to the previous year. This is basically unchanged from the 31.8% year-on-year drop in July.

• Belly capacity for international air cargo was 67% below the levels of August 2019 owing to the withdrawal of passenger services amid the COVID-19 pandemic. This was partially offset by a 28.1% increase in dedicated freighter capacity. Daily widebody freighter utilization is close to 11 hours per day, the highest levels since these figures have been tracked in 2012.

• Economic activity continued to recover in August reflected, among other things, in the performance of the Purchasing Managers’ Index (PMI) indicator of economic health in the manufacturing sector:

o The new export orders component of the manufacturing PMI rose by 5.1% year-on-year, its best performance since late 2017.

“Air cargo demand improved by 1.8 percentage points in August compared to July. That’s still down 12.6% on previous year levels and well below the 5.1% improvement in the manufacturing PMI. Improvement is being stalled by capacity constraints as large parts of the passenger fleet, which normally carries 50% of all cargo, remain grounded. The peak season for air cargo will start in the coming weeks, but with severe capacity constraints shippers may look to alternatives such as ocean and rail to keep the global economy moving,” said Alexandre de Juniac, IATA’s Director General and CEO. 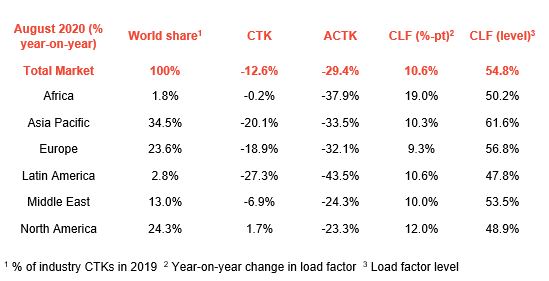 • Asia-Pacific airlines saw demand for international air cargo fall 18.3% in August 2020 compared to the same period a year earlier. After a robust initial recovery in May, month-on-month growth in seasonally-adjusted demand declined for the second consecutive month. International capacity is particularly constrained in the region, down 35%.
• North American carriers reported that demand fell 4% compared to the previous year—the third consecutive month with a single-digit decline. This steady performance is due in part to strong domestic and transpacific demand on the Asia-North America route, reflecting e-commerce demand for products manufactured in Asia. International capacity decreased 28.2%.
• European carriers reported a decrease in demand of 19.3% compared to the previous year. Improvements have been slight but consistent since April’s performance of -33%. Demand on most key trade lanes to / from the region remained weak. The large Europe–Asia market was down 18.6% year-on-year in August. International capacity decreased 33.5%.
• Middle Eastern carriers reported a decline of 6.8% in year-on-year international cargo volumes in August, a significant improvement from the 15.1% fall in July. Regional airlines have aggressively added capacity in the last few months with international capacity improving from a 42% fall at the trough in April, to a decline of 24.2% in August, the most resilient of all regions. Demand on trade routes to and from Asia and North America remained strong with demand down 3.3% and up 2.3% respectively year-on-year.
• Latin American carriers reported demand steady at -26.1% compared to the previous year, ending three consecutive months of deteriorating demand. Demand on trade routes between Latin America (particularly Central America) and North America have compensated for weakness on other routes. Capacity remains significantly constrained in the region with international capacity decreasing 38.5% in August, the largest fall of any region.
• African airlines saw demand increase by 1% in August. This was the fourth consecutive month in which the region posted the strongest increase in international demand and only instance of year-on-year growth among all regions in international volumes. Investment flows along the Africa-Asia route continue to drive the regional outcomes.