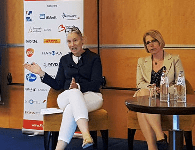 The pharma shippers are invited to join the IATA CEIV Pharma quality programme, which is going through an update. This was highlighted at the FlyPharma Conference in Brussels.

Andrea Gruber, Head of Special Cargo, IATA, reminded attendees of the fact that the programme was initially intended for the cargo handlers, but was eventually designed for the entire supply chain and its stakeholders. Its methodology, she said, is in encompassing various regulations international standards and country specific requirements.
Ms Gruber identified 4 specific benefits of Pharma CEIV: compliance by instilling trust & confidence in the air freight environment; visibility by identifying and recognizing the best players, quality through disseminating standards in the industry and risk mitigation by promoting best practices to the shipper’s community. “It enables us to raise the bar in the industry by improving the level of competence, operational and technical preparedness”.

Brussels Airport as catalyst
In 2018, the certification of 218 companies has so far been completed and 75 are in progress. IATA estimates that the applications for 99 additional certifications are under discussion. Brussels Airport was the catalyst for the implementation of IATA CEIV as it was the first airport worldwide to go for a community-wide approach. To date there are 15 on-going airport communities globally and another 8 are in discussion to be set up.
The view of the pharmaceutical industry was expressed by Debora Mattys, Associate Director – Compliance Operations Global Logistics of MSD Belgium, a subsidiary of pharmaceutical company Merck & Co Inc. Reflecting on the Brussels case she said that in 2006, there was a limited pharma knowledge at the airport.
The set-up of the BRUcargo Pharma Forum in 2012 led to the launch of CEIV Pharma in 2014. As a result, Brussels Airport started investing heavily in compliant pharma warehouses that are GDP (General Distribution Practices)—licensed. “Today Brussels Airport can boast the biggest concentration of temperature-controlled airport facilities in the EU” said Ms Mattys. “As a further step in the expansion of the BRU pharma hub project, the airport set up Pharma.aero together with Miami International Airport.”
2018 is the year in which Pharma CEIV is going through a maturity assessment. IATA consultation brought over 300 questions, leading to the identification of missing links on quality, security, transportation, warehousing, training, inter alia.

Shippers’ version
This evaluation process by IATA eventually produced the CEIV version. On top of that the organization came up with the (new) Pharma Shipper’s CEIV version on Labeling, Packaging and Documentation.
IATA’s update of the program is currently going through the final reviewing process and is to be introduced as a white paper in the third quarter of this year. It will then be debated at the TIACA Toronto-held conference in October.

Awareness needed
To solve the problem of pharma shipments being handled as general cargo without taking into account the specific handling conditions they require, Ms Mattys insisted that all parties should pay attention that the specific Special Handling Code for pharmaceuticals (abbreviated as PIL) is put on all AWBs and related documents. PIL is one of the codes that are part of the air logistics glossary freight forwarders are supposed to use.

She also said that the focus in the process should be on tarmac transport and change management, to allow more visibility of certified services.
CEIV is not yet mentioned as a requirement, she said. “We need some awareness building in the pharma companies. Our aim as pharma shippers should be to use only Pharma CEIV certified companies.” Ms Mattys also advocated the development of an active predictive packaging tool, supported by the digitization initiative of Pharma.aero.