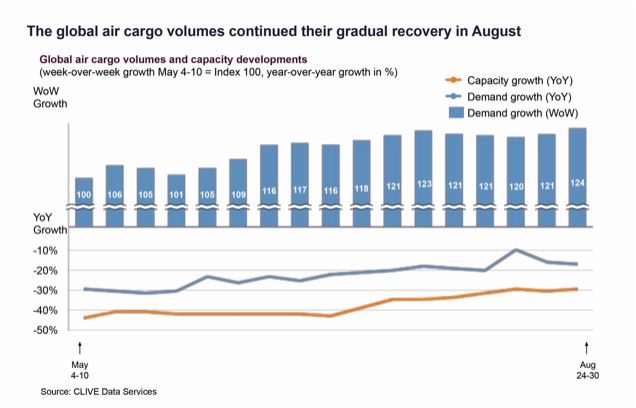 The airfreight market has showed signs of improvement for the fourth consecutive month, CLIVE Data Services’ and TAC Index’s latest data has shown.
“Year-on-year growth during August showed a further narrowing of the gap in international air cargo volumes to -17% versus August 2019,” the analysts said.
By comparison, there was a 41% year-on-year disparity between April this year and last year.

CLIVE’s dynamic load factor decreased from 70% in July to 68% in August following downward pressure caused by capacity gains.
However, CLIVE noted: “This is exceptionally high considering that August is traditionally air cargo’s ‘slack season’ — registering at 8 percentage points higher than the corresponding performance in August 2019”.

Volumes in the last week of August were 4% less than the same week in 2019, which CLIVE managing director Niall van de Wouw said was “not great, but by no means a disaster”. He added: “Our August data shows the year-over-year decline in volumes is decreasing. The capacity crunch is still there but is becoming slightly less and, as a result, load factors and yields are going down and becoming closer to pre-Covid levels, even though they are still elevated.

“Airline cargo departments have never been in control of their own destiny, and they’re still not, but they are in control of the present and short-term in deciding where to place their cargo capacity.